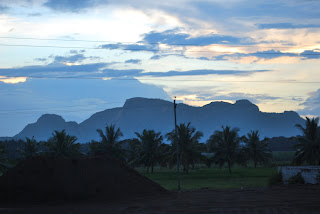 Last saturday(25th Sept), we did a failed attempt to scale this hill. Sandy had called for a random hill climb on the Kanakapura road. Pulled Vivek along and started at 10:30am. Saw quite a few hill all along, but nothing caught our attention like this one did. It started showing up from quite a long distance before Kanakapura. On the Kanakapura-Ramanagara road, parked our bikes and started walking through the fields to reach the base of this hill. It took quite a while to reach the base. Since we had already walked so much to reach the base, we started climbing from whichever side of the hill that was nearest to us, without even thinking if it would take us to the summit. 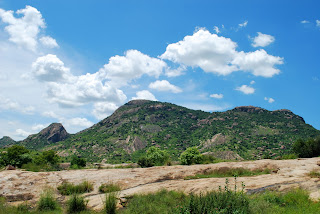 Maybe because of wrong timing (started around 11:30am) or wrong path we took, got stuck up between boulders and the thorny shrub forest. Fully exhausted and no idea of which way to go, we had to call it off.
Its an insult to us as well as the peak, if it is left unfinished. So, with great vengeance and a greater force(with 5 people this time) launched an attack on the hill on 2nd Oct. Vivek couldn't join us, instead Dayanand, Sunny and Shiva poured in. Yamaha, Suzuki and Pulsar.. this time set out from Bangalore at 6:30am. Rode all along the muddy track till the base of this hill. It was an adventure in itself to balance ourselves while driving through slush and rainwater streams. Parked all the 3 bikes near the hill, and started trekking on whichever face of the hill, we felt trekkable. It was around 8:30am and the weather was relatively cool. Again, dont' know if it we had again chosen the wrong face of the hill; we encountered either steep climbs or deadends with huge boulders and thorny forests. It had rained the previous night, and the weather turned very hot and humid as we climbed. Slowly, Dayanand and Sunny dropped out and decided to wait while the rest continued. Whenever we got deadends, we climbed down a bit and took a detour. Had to use all the military skills :) . Never expected this hill to be so tiring and challenging. It was either 70 degree steep climbs or dense forest patches full of thorns. Many a times, we felt like abandoning ... but how can our Ego allow it!! It would be the 2nd failure, if we do so. Finally when we reached the summit half-dead and dehydrated it was around 1pm. 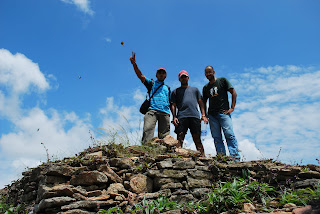 The hill top was a flat rocky ground almost the size of a football field. Never expected such a vast flat area on top of the steep hill. Without wasting much time, (as we had no water left) started the descent. Descent looked tougher than the climb. Whichever path we thought was the best route down, led us to steep drops or dense thorny vegetation. At one point, we had to ask our buddies who had returned to the place where the bikes were parked for directions. In between all our troubles, it started to rain. Steep naked rock where we can't even stand straight and it starts raining. Imagine our plight.. .. Thankfully, rain god showed some mercy and the hot rock made sure the rain water evaporates quickly. Finding the rock face which can lead us to the base, was the greatest challenge. Our brains were switched off due to dehydration. At one point, Shiva was trapped in a creek with nowhere to go. Couldn't pull him out too, as we were not firmly placed. He couldn't go the other way as it was very steep. It required lot of planning and dare to come out of it. Most of the downward journey, it was "Bum equipment" or the "6 point contact technique(jaara bandi)" we used. With parched throats, torn shoes and a punctured body (with thorns all over) reached the base where our buddies were waiting with water to extinguish the fire inside :P 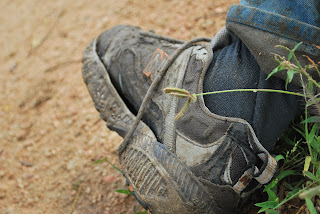 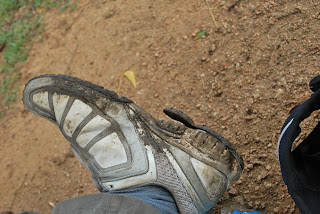 Took some rest below a tree, got to know that there is a mari temple beside the hill from where there is an easier route to the top. BUT... who needed it???? The route we took made it the toughest trek we ever had around Bangalore and the most memorable one. 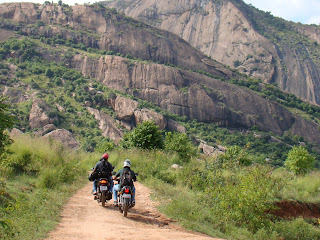 Heard a guy named Vinay had an emu farm nearby. Visited that place, but he had moved them out to some other place for rennovation :( . But the route to his farm, gave us some beautiful angles of the hill. 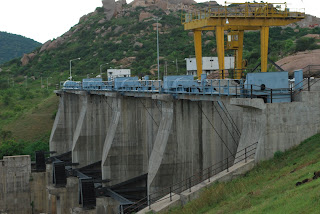 Next in agenda was the Arkavathy dam a.k.a Harobele dam. Did some pet pooja at Kanakapura and took the sangama road. With rainbows and green fields giving a welcome sign, the 20km distance was covered in no time. Spent some time leisurely lazing around and watching plenty of birds around. 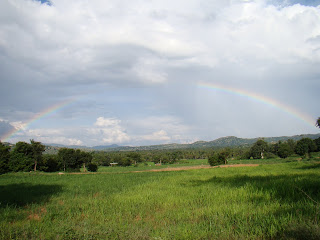 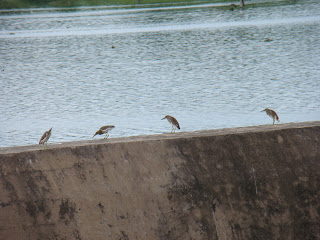 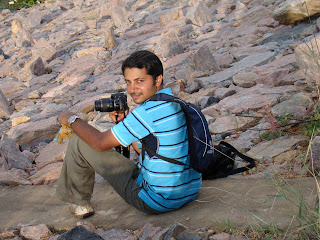 Started the return journey by 5:30pm. Stopped at a bakery after harohalli to munch some yummy capsicum puffs, dil-pasand and what not. Hungry as hell we were..
Back at home sweet home, didn't waste much time to retire on our beds, of course.. needless to say on our tummies ;). Sunday was reserved for search and hunt operation. Finding thorns and removing them from God knows where all from our body.